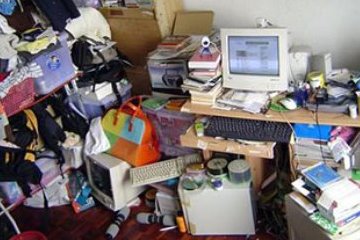 Even at the best of times, moving is stressful. And when a move goes wrong, it can go very wrong. We turned to several of our amazing Move Specialists in the You Move Me call center for some perspective on exactly how bad a move can go. Our specialists take calls every day from people who’ve had terrible experiences in the past and want to avoid the same mistakes.

These are their stories.

“I once spoke to a woman who owned a ton of antique furniture, including an armoire which was a family heirloom. She was very specific with her previous movers about handling this piece carefully. As a matter of fact, she was so nervous about it that she took an extra trip back to the first apartment just to make sure.

“The first thing she noticed was that one of the movers was leaning against it while taking a break. There were even cups of coffee sitting on top! When the mover leaning on it saw her come in, he stood up so fast that he knocked one of the back panels out of the armoire and spilled the coffee!

“She confronted them about the damage and the coffee rings on the piece. Eventually they said ‘Fine, we just won’t move you then,’ and took off! They completely left her hanging, with no backup, for something that was their fault to begin with.”

“This young couple told me about their last move a few years ago. They were all prepped and ready to go, but when their movers showed up they had literally no tools for disassembly! Their idea of customer service when asked why not was to shrug and say, ‘Sorry, guess we can’t disassemble anything. What else do you want to go?’

“So the husband flew over to Walmart and grabbed a whole set of tools at his own expense. He came back, and the movers used them to disassemble the furniture and load up the truck. Then everyone - clients included - drove over to the new home.

“But when they arrived, it turned out that the movers had left the tools behind at the first location! The husband had to drive all the way back and pick up the tools while the movers unloaded the truck. Only when he got back (after hours on the road), did the movers finally reassemble the furniture and finish up.

“It was later that the couple realized something else – the movers took the tools with them when they left!”

“There was one call I took a while ago. A woman needed to get some stuff into storage and remove some other stuff to bring back home. She found a couple of guys on Craigslist, who came around and loaded up the van with no problems.

“She waited for hours at the storage unit, with no communication from the movers. Finally, she gets a call from an unknown caller ID.

“‘Hey, we have your stuff but we’re not meeting you unless you pay us another $500!’

“Of course she called the police, who started tracking the movers down. In the meantime, she called us. After she told me her story, she hired You Move Me to get the stuff she needed out of storage and back home. But I never found out whether the cops nabbed the Craigslist movers or if she got her stuff back!”