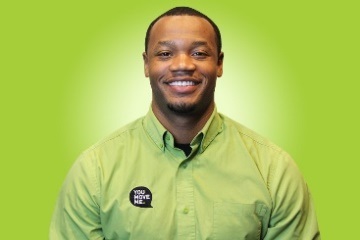 From Powerless to Powerhouse: How This Man Took Control of His Future

Curtis McDowell used to work in operations for the largest moving franchisor in North America — but his good ideas often fell on deaf ears. He knew the moving industry well but wasn’t getting ahead, no matter how hard he tried.

Tired of not getting ahead working for someone else, he began exploring ways to use his operations and industry knowledge to start his own business. That’s when he found You Move Me.

Below, Curtis tells us why he decided to own a You Move Me franchise, how his operations experience prepared him to own his own business, and the benefits of owning a business over working a 9 to 5 job.

YMM: How did you get your start in the moving industry?

CD: I first worked as assistant operations manager for the local franchise of a national moving company. During the year I was there, I saw so much room for opportunity and had ideas for how to streamline our processes. I brought ideas to the management team, but unfortunately, they weren’t very open to change.

YMM: So in your quest to start your own business, how did you end up owning a You Move Me franchise?

CD: I wasn’t interested in franchising at first. I wanted to start a business on my own. But then my wife came across You Move Me and suggested we join a franchise system instead of starting from the ground up.

I was skeptical of a large company, given my previous experience. But the more I read up on You Move Me and its parent company, You Move Me, the more I liked it. The people, the slogan (we move people, not just their boxes), the way they run the business — all of it aligns with everything I believe in.

YMM: How did your previous experience in the moving industry prepare you to own your own moving franchise?

CD: The first company I worked for was a huge operation, with 30 trucks running a day in our area. That really prepared me for large-scale moves and the busy season of the moving industry. I also learned about what customers want — to be taken care of — which is my primary focus with our You Move Me franchise.

YMM: What surprised you the most about owning a franchise?

CD: As prepared as I thought I was through my previous job, I was really surprised by the amount of work owning a business entails. I  had to work on the trucks in the beginning; I’m also responsible for accounting, payroll, and more. But I’ve had so much support — from corporate head office, my employees, other franchisees in the system, and my wife.

YMM: What are the benefits of choosing to own a business through a franchise system?

CD: When you go into a franchise system, you have high expectations of how things will go. At You Move Me, they live up to their promises. The support and the people have been incredible — I can call or email at any time and know I’ll get an answer back right away. Even the CEO,  treats you like family.

YMM: What is the most rewarding part of being a franchise owner?

CD: I get to spend more time with my son — which, considering how much work running a business is, might sound surprising. But as a business owner, I can balance my time in a way that a 9 to 5 job wouldn’t allow.

Secondly, I can see so much opportunity with this company. Business ownership gives me a chance to give back and to lend a helping hand, which has always been my number one goal.

As a franchise owner, I have a say in what happens and I’m in charge of my future — and it’s a future I wouldn’t have had otherwise.

5 Things You Can Do To Make Moving Less Stressful

We all know that moving can be stressful. There are a lot of things to do and it always feels like you might be forgetting something. Also, changing your home implies a lot of emotional strain as well. So here we will tell you 5 things you can do to make moving less stressful. We will also explore why moving is so stressful in the first place.‍
Read more ›

Working from Home? How to Create a Distraction-free Office Space

While it can be nice to be at home, it can also be easier to become overwhelmed or distracting when your personal life and work converge. We’ve put together some tips on creating a distraction-free office space within your home, so you can be the most productive and effective at your job.
Read more ›

It’s perfectly poetic to think about being inside near the fire when there’s a winter storm brewing outside. However, if you don’t spend some time preparing your home for the possibility of inclement weather, you may find that you spend a little less time delighting in coziness and a little more time huddling under blankets and trying to ward off an unexpected chill.
Read more ›